I have learned a lot more internal things about Google Cloud Spanner from past two days. I read some of the portions of the Spanner white paper and the deep internal things from the Google Cloud Next event videos from Youtube. I’ll share the video links here, but I want to summarize all the learnings in one place. Thats why I wrote this blog post. A special thanks to Deepti Srivastava(Product Manager for Spanner) who presented the Spanner Deep Dive sessions in the Google Cloud Next Event.

The Pain with MySQL: #

In 2005,2006 Google was using the MySQL at massive scale. Google Adwords is one the biggest platform where 90+ MySQL Shards are used to store the data. Due to some maintenance they reshard the MySQL Clusters. This process took 2 years to complete. Google understood that they are growing very fast and these kinds of databases will be a pain in future. That is how the Spanner was born.

Once they decided to build something new with distributed, the Big Table team was the one who started working for the Spanner process. Because BigTable uses distributed process, storage and highly available(or may be some other reasons as well).

Colossus is the distributed file system which is derived from the GFS. A high performance file system is needed for a super database. This project started by BigTable team and the BigTable is powered by Colossus. So Spanner also got the colossus as a filesystem.

The Google Adwords is MySQL bases stack and a lot of fans for SQL(at 2005). They wanted to build something with SQL, its dealing with Money, so ACID compliance are the other main key point. The pain with MySQL is resharding. So they want the sharding features like the traditional NoSQL sharding that will take care of resharding and rebalancing. Plus more availability, Horizontal Scale and globally distributed.

Spanner is global database system, per region we’ll get minimum of 3 shards. Each shard will be in each zone. In Spanner terms a shard is called as Split. If your provision 1 Node Spanner cluster, you’ll get 2 more Nodes on the different zone which are invisible to you. And the Compute and Storage layers are de-coupled. Paxos algorithm is used to maintain one leader at a time and rest of the nodes will be the followers. 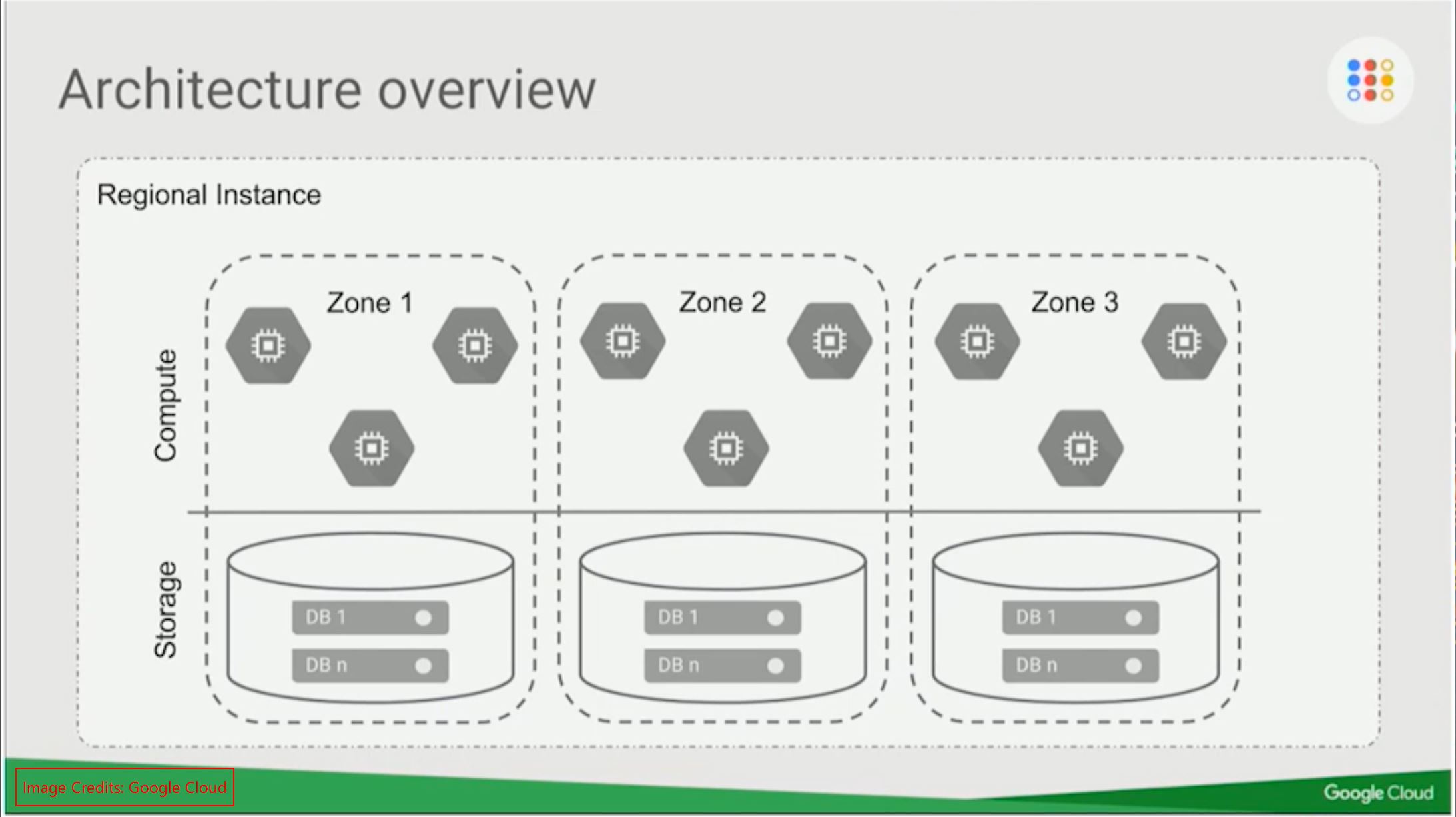 Based on the partitions, we’ll have more Splits(shards) in the storage layer. Each shard will be replicated to the other Zones. For eg: if you have a shard called S1 on Zone A, it’ll be replicated to Zone B and C. The replication works based on Leader follower method. So the Paxos will help to maintain the quorum and will help to select a new Leader during the failure. If you are writing something on this Split, the Spanner APIs are aware of the Leaders. So the write directly goes to the Zone where it has the Leader Split. Each Split has its own leader zone.

when I was watching the deep dive video of Spanner, they were discussing the strong consistency. Spanner supports the strong consistency across all the nodes(Globally). If you write something on US region, you can read that same data from the Asia region or any other region. How they implemented this logic? Its called TrueTime. 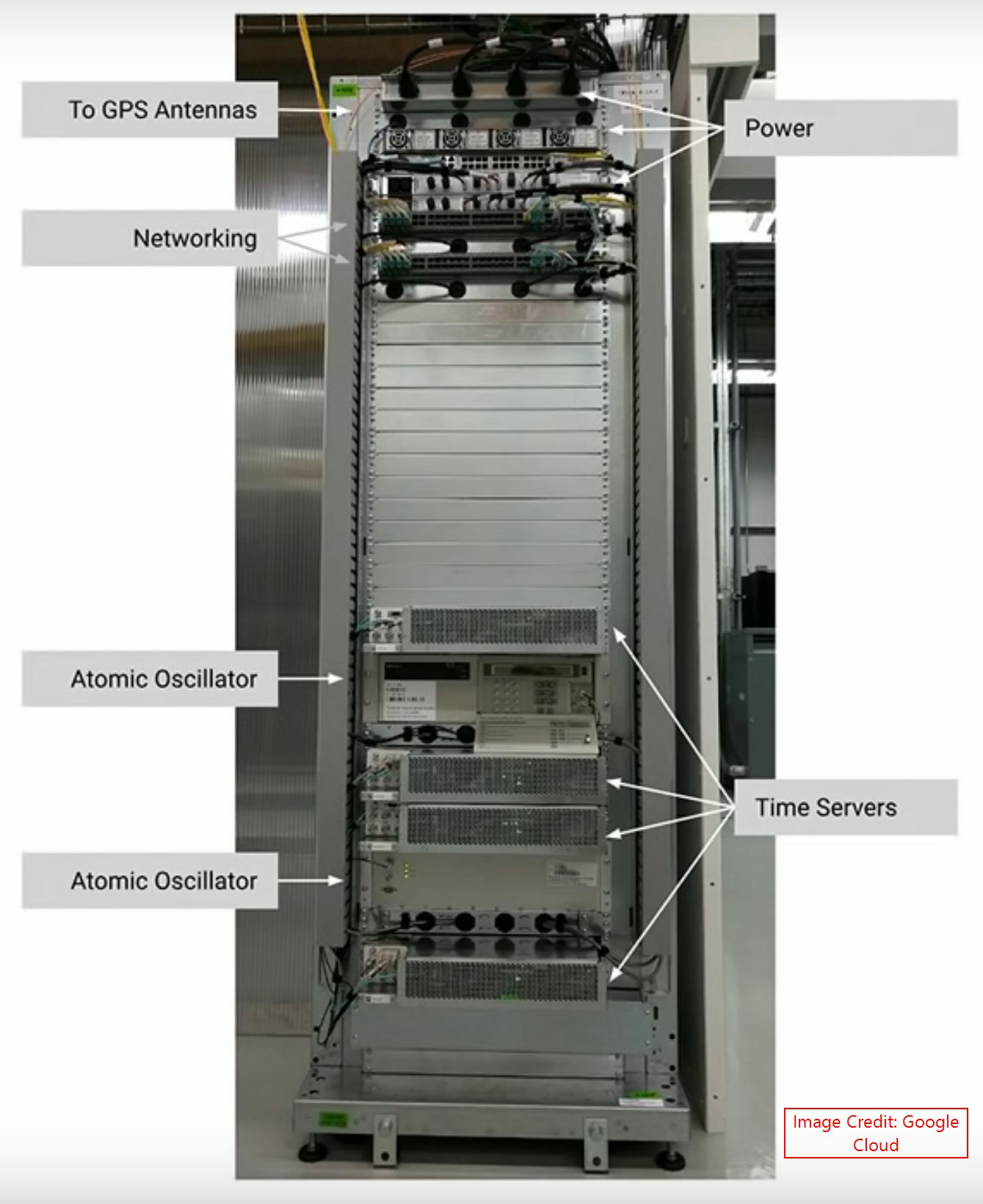 Spanner is very keen in syncronizing and maintains the same time across all the nodes over the global datacenters. Their hardwares are built with Atomic Clocks to maintain the time. If you take a look at the Server Hardware Rack, the Server is having 4 time servers. 2 Servers are connected with GPS and the remaining 2 are connect with Automic Oscillators. There are 2 different brands of Oscillators for better failover processing. The GPS time servers will sync with Oscillators to synchronize the time across the global datacenters with every 30sec interval. 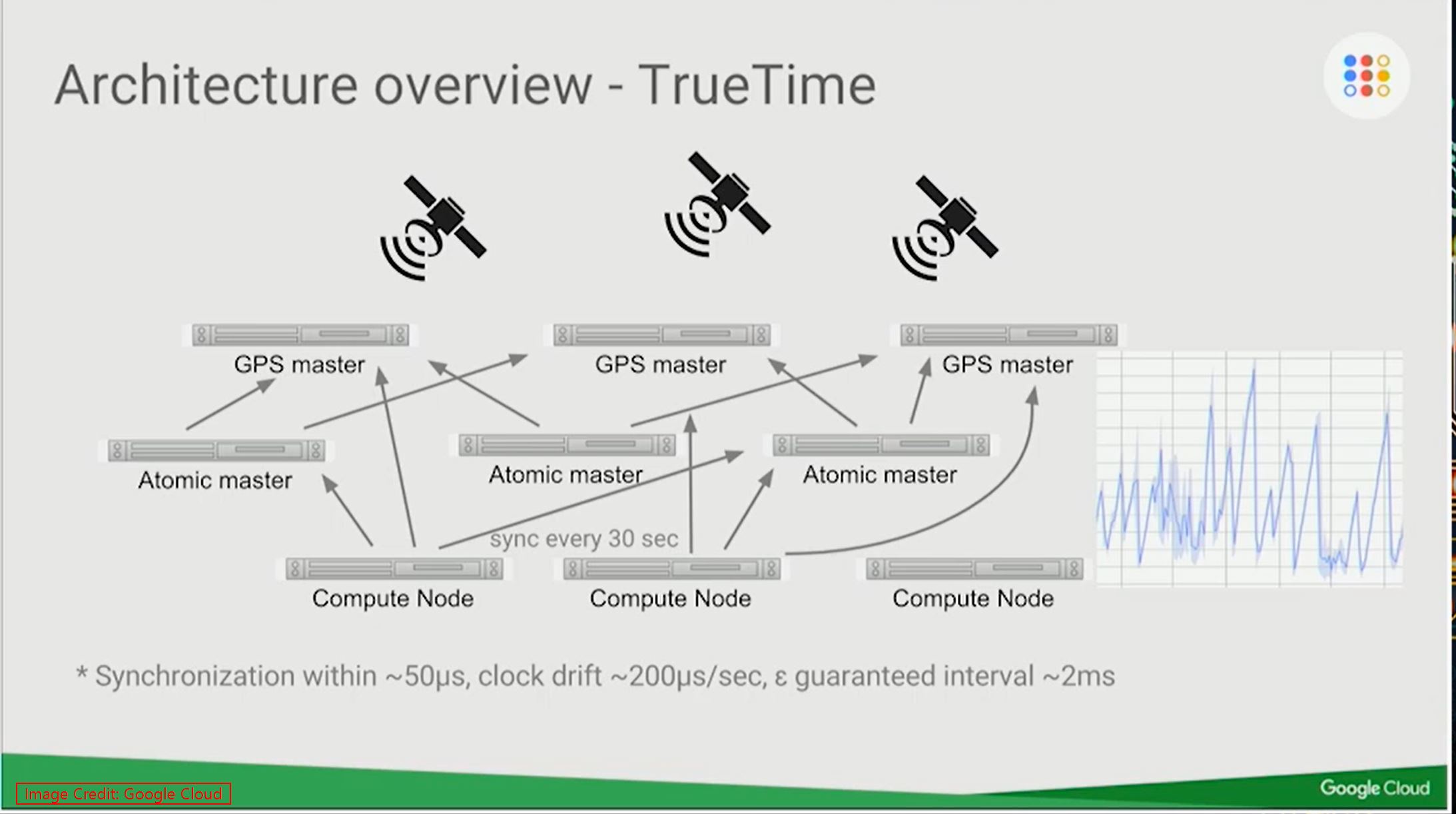 Now you may have a question, how this TrueTime will help with the Consistency? No worries, please scroll down.

For Eg: If you are writing a data on Node 1, it’ll commit the data with the TrueTime timestamp and replicate the data and timestamp to the other nodes. This timestamp is same on all the nodes. Lets say we committed this data on Node 1, if you are reading the same data from the Node B, then the Spanner API will ask the leader of the Split for last committed data’s timestamp, if the timestamp is matching from the Node A’s timestamp then the data will be returned from Node B, else it’ll wait until the Node A sync the data to Node B and then it’ll return the data.

Here is the life cycle of a single write operation. We are writing a row that will go to Split 2. Now the Spanner API will understand who is the leader node for Split 2, then the request will go to Zone B node(Blue indication refers to the leader). Then it’ll acquire the lock write it on the split. Once this write has been done, it’ll send the requests to Zone A and C Nodes to write the same. It’ll wait for the acknowledgement from the majority of the nodes. Once the leader split got the majority of the acknowledgement, then it’ll send the success response to the client.

If you are writing the data in a single transaction, but the data resides on different splits, then the spanner will handle it in a different way. For eg: we have to update 2 rows.

When we initiate the transaction, the Spanner API will understand that the rows are in different split. And they will randomly pick a Co-ordinator zone. In our example, the API has chosen the Zone C is the coordinator zone. The following steps will be performed for the multiple row operations.

Life of a Read operation: #

While reading the data from Spanner, the data will be fetched from the nearest follower split. Lets explain this with an example. Refer the below image.

We want to read the data from MyTable, for the value 123. This value is stored in Split 2. Now once the request reached the Spanner Frontend server, then it’ll understand who is the nearest follower split and forward the request to that split. In our case, Zone A is the nearest split. Once the request reached the split, then that split will ask to the Leader split to get the last committed TrueTime. And then it’ll compare the Timestamp with its own timestamp. If both are matched then it’ll serve the data to the application. If the timestamps are not matched then the leader split will ask the follower to wait until it sync the data to that Zone. And then the split will serve the data.

Spanner support MVCC. So it’ll keep the old data for some period of time. If our applications are fine to get the old data (older than X seconds) then we don’t need to wait for data sync from the leader split. For example, We have to tell the Split that we are fine with 15sec old data, then it’ll check the committed timestamp and that is less than 15 seconds, then the old data will be served to the application.

Till now, we read every operation scenarios within the region(zone level only), but Spanner is built for scale to multi regions. The architecture and write/read operations will have a slight difference in the multi region setup. In the single region concept, we need at least minimum of 3 zones to create the cluster. And the zones are supports both read and write. But in Multi region concept, One Continent will be act as a Leader and the rest of the Continent will be the followers. In Spanner terms, the Continent where we have more region will be the quorum. All the writes will go to any region in this continent. In the quorum continent, 2 regions will be hosting the data nodes, and 1 region will host the witness for failover. Other continents will have read only replica nodes.

In multi region concept, the wites are always performed on the Quorum continent. Lets say, US region is the R/W continent, then if you are sending a write request from the US region, then the Spanner API will send it the nearest region, once the data has been committed then the success response will go to the client. If you are sending a write request from Asia region, then the Asia region’s API servers will put the request into Google’s internal network and send the request to the US region’s API server. Then that US region API server will commit the data and the success response will be send it to Asia region client.

For Reads, the process is same as single region concept, if the TrueTime matches, then the data will be served from the local region, else it’ll wait until the data sync to the local region and then served to the clients.

I hope I covered most of the internal concepts of Spanner. But still there are a lot more things to learn in Cloud Spanner. Im sharing the Google Cloud Next event videos links.